Conversation with Graham in October - G: "So do you want a copy of Fred Minnick's book". Moi: "I'm not sure I want to read a book about whisky women written by a man". G: "And why not?" Moi: "What could he possibly say from a man's perspective that would truly be relevant to women and whisky. Meh, maybe?"  Yup... me - at my worst. I state I'm not a feminist and think I'm open minded?! Hey, I am human and I will chalk some of it up to my upbringing - My mother was a burn your bra, damn the man kinda mom who encouraged me to push the limits of what was expected of a girl in the 70's but also ensured I was constantly reminded that by stepping into a "man's world" I would have to work twice as hard to be considered half as good. I can think of several examples where this was unfortunately true.

So why wouldn't I be skeptical and close minded about a book written by a guy that deals with women and whisky. Because, I had (past tense) a firm belief that if you are not a woman, how can you possibly empathize? You know, you don't have a vagina so how can you even remotely know what it feels like to have the pains from your period?

So back to Fred and his book. I saw it while I was in New York City and I picked it up. Cover looked like I expected - Not exactly the "sexiest" of images but I opened it and read the table of contents. The very last chapter is entitled: For women, by women. I sheepishly admit I rolled my eyes BUT... curiosity kills the cat and so I went to look at it. What I found not only changed how I felt but truly made me feel ashamed that I had so easily misjudged someone just because of his gender. Fuck! I did what had been done to me for years - reverse feminism. I put the book down and walked away feeling like the biggest schmuck and too embarrassed to even tell Graham about it when I got home. I did however mention later on that I wanted a copy for Christmas.

In early November I interviewed Chuck Cowdery and he said something that stunned me: "Fred Minnick is a mentor of mine and I've learned a lot from him". Fred is almost young enough to be my son?! Totally intrigued now...? As soon as we hung up I went online and started looking Fred up. That was twice this man's name crossed my path and I firmly believe things like that don't happen at random. What I found prompted me to contact Mr. Minnick and ask if I could interview him for my profile series.

"After a tour in Iraq, I moved to Louisville, KY, to be with the woman who is now my wife and the only job I could find in 2005 was a food editor position at a restaurant trade magazine. I lasted 10 months, but the job gave me incredible skills that helped carve out a niche in food, wine and spirits. And of course, when you live in Kentucky, you must make bourbon a priority. So, I strongly pursued a wine and spirits (with a main emphasis on bourbon) writing / photography career. I wrote about bourbon for wine magazines, meeting magazines, scientific magazines, newspapers and even tried to write about it for financial sites. If somebody would pay me, I’d write about it. The operative word being paid. Since this is how I make my living, I don’t write for free.

Starting out, I read as much as I could and took advantage of my location, always interviewing master distillers and bourbon historian Mike Veach, who’s been a great educator. The whiskey business has so many great people, and I generally think we all try to help one another."

Q2: What motivates you to be in this part of the industry? Sometimes it can be quite unkind and very few can make a living doing this?

"After surviving war and surviving the return home, I decided to never let anybody dictate my future. I will determine what I want to do, and I chose to write about the good things in life. This industry is a never-ending web of mystery and fascination with a few great drams in between. I also take on the responsibility to uncover history, write poignant reviews and make informed opinions about whiskey. I genuinely enjoy finding stories that are not on anybody’s radar. For example, I wrote about Mexican bourbon and Mormon for Whisky Magazine and nobody had ever heard of either. But, my favorite of never-heard-of stories was my “Kentucky Leak Hunters” piece for Whisky Advocate in 2011, where I followed a group of Buffalo Trace leak hunters around the warehouse for a day and just observed them looking for leaking barrels. They were saving precious whiskey. Could their be a more important job than a whiskey saver?"

Q3: What sacrifices or tough decisions have you made to get to where you are now?

"When you write about booze long enough, the marketing veil is eventually pierced, the protective PR tarp falls to the ground and you see the business for what it really is—a business. And there’s a lot of bullshit floating around whiskey. As a writer, I think it’s okay to get caught up in the pageantry and beauty of a good story. But, I feel it’s extremely important to not get “taken” on long fictitious rides. So, there’s a fine balance between sacrificing the newspaper reporter inside and becoming a hopeless whiskey romantic, where I dote on every brand. I still find ways to break whiskey news and craft in-depth details that marketers usually don’t want out there. For example, I’m extremely proud of the MGPI feature in the most recent issue of Whisky Advocate. The inside whiskey world knew they supplied rye whiskey to umpteen brands, but I wanted to detail their anonymous distiller without passing judgment."

Q4: After publishing your first whisky book, care to share what some of your upcoming plans are?

"I’ve got a few things in the hopper, but I’m mostly looking forward to becoming a dad. No matter what I will accomplish as a professional, nothing will be more important to me than that."

Q5: If you could go back in time and talk to Fred Minnick in 1984, what would you want to tell him?

About two weeks after I interviewed Fred, my friend Susannah Skiver-Barton surprised me with an autographed copy of his book. I was extremely touched by her gift as I hadn't told anyone I was writing about Fred. Kismet?!

Two weeks later the whole Dewar's debacle took place and Fred, a man I barely know stood beside me and many others on this issue. AND... was instrumental in taking the ad down.

Again, serendipity? Scary to think about it isn't it...

I spoke to Fred a few days later about this article and to thank him for his support and help. I had to ask him one question: "Why? Why would he write a book about whisky & women? His answer was quite simple: "Because it was way past time it was done." Fred has faced ridicule for writing this book. He knew, ahead of time this would happen but armed himself with facts and tools so the book is accurate and factual. There is no fluff and certainly no bullshit.

I also confessed and apologized about my somewhat ignorant conversation with Graham. Just so happens Chuck couldn't have been more right. I have much to learn in this "man's world" and the first lesson is that the next generation of writers/whisky drinkers don't see it that way anymore. It is with the deepest respect that I write this particular blog. Fred, his book, the Dewar's ad and everything that has come has propelled me down yet another unexpected road. 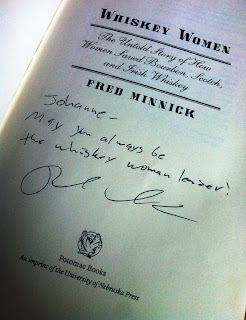 Fred, you are a mentor and wise beyond your years. I've come to the conclusion that your world is not that much different than mine and I thank you for that.