Yes I am dedicated and almost obsessive when it comes to some things in my life. It is with great commitment that I seek, research, absorb (unlike some sponges these days...), live & breathe when I am passionate about a subject. I took to track & field in high school with that determination and precision. I feel the same about sailing, especially competitively. And then, there's whisky...

I can't imagine that ever changing. Part of being such a geek stems from the fact that I still love to read everything I can get my hands on may it be other blogs, articles, magazines and of course books. When I decided to write this series, I went back to some of the first books/magazines I read and just like my first whiskies I have a soft spot for some of those too. The pocket guide to Scotch Whisky was one of the first books I ever read. I found it at the library many moons ago. I sat, thumbed through it quietly and read for close to 2 hours when I was suppose to be studying for an exam: Best 2 hours of "wasted" time, ever! It was easy to understand, well written and simple. The terminology didn't overwhelm my newbie brain. I devoured that book and like every other whisky fan, hoped that someday I would actually get to meet the author. Meet him, I did... Spirit of Toronto May 2013, word came out that he would be leading one of the master classes. A) I was going to SoT and B) I had a ticket. His class was great. He is a fantastic speaker and presenter however, at a class or event you rarely get the opportunity to talk or really converse so it was an even greater pleasure that I was given the chance to dram with him and Ralfy for about 30 minutes. It was an opportunity for me to share my pride and love of Canadian whisky with two icons. Not fluffy conversation but real discussion about how the industry is changing, how perceptions on Canadian whisky are changing and that it is a shame that it isn't more readily available anywhere else in the world. Both of them loved the rye flavor, the sour overtones and the punch of spices. I, on the other hand, still struggle with the Lot 40 neat and have to add water to be able to enjoy it. Charlie mentioned it was refreshing to see someone admit that water was needed in a whisky and that too many "snobs" were trying to dictate how people should enjoy their drams. More discussion, more whisky and a night I won't forget. It was truly whisky bliss as far as the experience goes.
I wasn't sure he would remember me and I really wanted to have him as part of this series so this fall I contacted Mr. MacLean and asked if he would partake and he replied immediately with a resounding yes.

Ladies & Gentlemen, it is with great pleasure and respect that I present: Mr. Charlie MacLean.


"Ha! I don't think there was such a creature as a 'whisky writer' when I was a boy! Most seem to have been professors or gentlemen of private means with an amateur interest in whisky - George Saintsbury, David Daiches, RJS McDowall, Michael Brander, Sir Robert Bruce Lockhart, etc.

I did, however, encounter malt whisky as a boy in the late 1960s - the father of my best friend at school owned The Glenlivet distillery, and I used to go there for holidays. I wrote my first piece for a whisky company - a brochure, for Bells - in 1981. The rest, as they say, is history. I am currently working on my 13th book about whisky".


What motivates you to still be in this part of the industry? Sometimes it can be quite unkind and very few can make a living doing this?


What sacrifices or tough decisions have you made to get to where you are now?

"Writing a book takes a long time, during which you tend to become totally immersed - you can't sleep properly, you keep odd hours, you sometimes drink and smoke too much. Also, since it earns you peanuts, the bank begins to bark and your wife begins to despair. As for decisions... I don't think I have ever made one in my life... I am entirely 'reactive'."


Since I saw you in May what have you been working on?  Care to share what some of your upcoming plans are?

"The current book is a history of Matthew Gloag & Son, creators of The Famous Grouse brand. I am nearly finished, and I have loved every minute of the research back to 1800. Next I have been asked to write text for a coffee table book about whisky by a famous photographer, called 'Spirit of Place'. And after that a book about smuggling (illicit distilling).
When I'm not writing, I'm traveling - tasting and talking about whisky: up-coming trips between now and January include New York, Paris, Monte Carlo, Dusseldorf, Basel, Stockholm, Helsinki, Jerez and Antigua."


If you could go back in time and talk to Charlie MacLean in 1984, what would you want to tell him?

"Keep taking the drugs...
Really, there's nothing I would change. I count myself extraordinarily fortunate."  End of interview...

After each interview I read and reread my notes and I'm always in awe at some of the responses.

What exactly am I looking for through this series? A blogger challenged me after I wrote about Dominic Roskrow and criticized me for not being critical enough to ask the hard hitting questions like a good journalist would. I was flattered to a certain extent that he would compare me to a journalist (lol...) but I told him if he wanted those type of questions answered to ask Dominic himself. Of course he didn't and that doesn't surprise me. As for me, well I will leave the "hard hitting" journalism pieces for Mark Gillespie.

These pieces about my favorite whisky writers are not exposés or hard hitting journalism articles. They are another part of the journey that constantly evolves. I am always trying to figure out how I fit in, not only as a woman but as a blogger and serious enthusiast. I love to write, I love whisky. Sometimes I feel like my blog doesn't matter.  That I'm not moving fast enough and getting "there"... but in the end, I'm not even sure where "there" is? 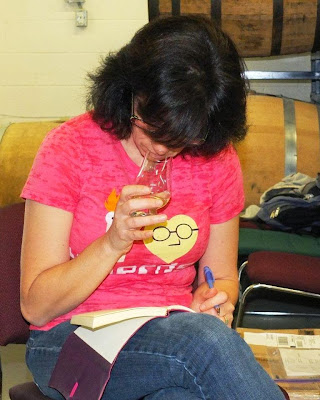 I tend to think that these people, these icons that I consider giants didn't worry about the end result because, well because it's not the end.

So what I'm learning for the time being is to keep putting one foot in front of the other, keep my eyes/ears open to opportunities and to continue doing what it is I'm doing... Whatever that is? Maybe some day I can look back and that is when I will realize where the "there" was.  Who knows?

Thanks to Charlie for the interview as well as the dram in Toronto. It means a lot to me that I get to do this and better yet, my way.