The muses (the mousai) of ancient Greek mythology were the goddesses of music, song and dance. They were the source of inspiration for poets and writers but also the keepers of knowledge who remembered ALL things that had come to pass. I've been called a muse a few times although I rather see myself as a sounding board for ideas or the builder of a "better mouse trap".  I love hearing what others think or what they are working on because if I believe in them I support them 110% even if some think I might be crazy but then again it could be why I inspire to begin with?

When I realized that whisky was quickly becoming more than a hobby I threw myself in head over heels. I've learned from some fantastic teachers along the way.  It's changed me as an imbiber and whisky'ofile.  But isn't that the beauty of the muses? The people who inspire us to be better informed and help us understand whisky in depth. That lead us page by page and with each chapter into a world of discovery that baffles and pleases us so we can't wait for the next book.  Yes...  I feel that way. It is one of the main reasons I think it's important I do these profiles.

Part 2 of my series is about a writer I have yet to meet (oh I will, it's my mandate for this year!).  He's a Glaswegian and freelance writer for many whisky & spirits publications. He is highly regarded as one of the best whisky tasters in the world which is probably why he was privileged & invited to taste the original Shackleton whisky to compare it to the replica created by Richard Paterson. Wow, right there!?  What I enjoy the most about his writing style is that he isn't afraid to explore the entire world of whisky (not just Scotland) and share with all of us his fascination of the science behind every drop.  I feel like he and I relate and understand that whisky is directly proportional to the people, the places and the history involved.  Isn't that the definition of a muse? His writing "speaks" to me and makes me want to be a better writer in return.

I tend to seek out his articles in Whisky Magazine when I need a fix of what I call intelligent writing. Don't get me wrong, there's plenty out there to pick from but when I need inspiration, I can always rely on finding it within the printed words of: Dave Broom.

This is not edited:  Hi Dave and thank you so much for considering this.  Here are the 5 questions I'm asking everyone that will take part in the series:

"Very true. When I leaving school my headmaster said I'd amount to nothing and should consider a career in the police, so after graduating I worked in a whisky bottling line and got a job in a wine shop. That created an interest in all forms of drink, passing some exams, a spell running a pub, a jazz column and then 7 years as features editor on a drinks trade weekly, writing about everything from bottled water to whisky.

When I left in 1995 to work in Australia, I realized I didn't have enough money to plant a vineyard in Margaret River so I returned home to write. Within about six months I was getting more commissions for whisky than wine. I suppose I was in the right place at the right time - malt whisky was just building up momentum, what was to become the London bar scene was just starting, editors were interested in pieces on whisky, I'd had experience and there were very few others specializing in the area, basically my mentor Michael Jackson and old friend Charlie MacLean. Luck."

"The fact that there is always something new to learn. Every dram teaches you something new, there are a myriad of new angles to explore. There are distilleries opening up every second it seems, there are always people interested in learning more or who want to take their first steps into the whisky world. The work has only just started.

Sure, it's tough making a living from writing, it always has been and is one reason I travel so much, and it's undoubtedly tougher now than when I started. The advent of 'all information is free' hasn't helped any full-time writer's bank balance. But, that's the nature of the world these days and we all have to find ways to live in it.

As for unkindness? I'm from Glasgow. I've got a thick skin. There again, I never tweet, mail, or text after my second drink. That helps to keep me out of trouble."

"Not having holidays for a number of years. Having to spend over a third of the year away from my family."

Q4:  You are on the cusp of starting something new, care to share what some of your upcoming plans are?

"There's a new book - Whisky: A User's Guide out next year (March in the UK, May in North America). It'll possibly be seen as a heretical text as I look at how whisky has been drunk for close on 600 years and guess what? At any time in that period when whisky has been popular it has been drunk mixed, long or has been flavoured. This creed of 'thou shalt not add water' is a modern invention and has done more to put people off whisky than attract them to it. I also look at how best to maximize your enjoyment of 102 different brands which I've tasted with five different mixers. It was fun!

Next? I'm becoming increasingly interested in the idea of place within whisky, in whisky culture in its widest form. It's far more rewarding, and challenging, than just writing lists of aromas or giving things scores. I suppose I'm interested more in the why than the what. Then there's rum.. and gin .. and tequila.. and mezcal … and Cognac …   anyone for absinthe?" 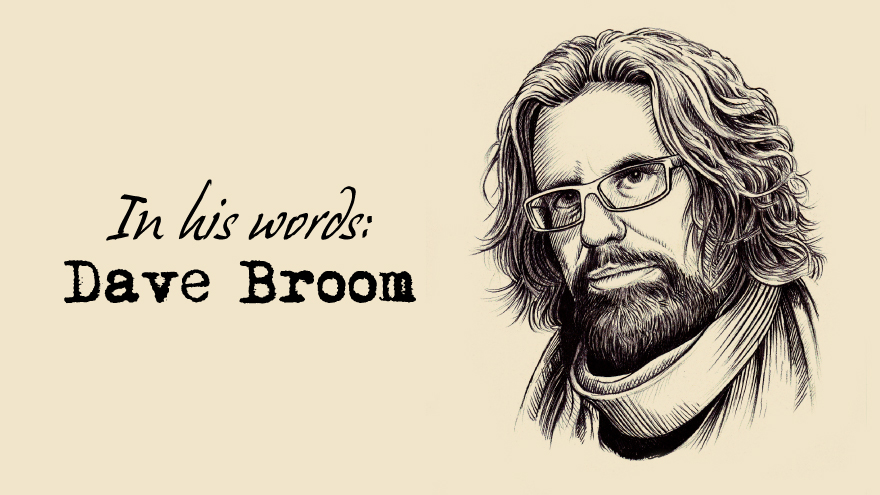 "This is about writing, so here's some things I keep in the back of my mind which might be of use to anyone thinking of starting.

Keep asking 'why?' Find distillers and blenders and ask them questions. Listen to them long before you start sharing your opinions. Never think you know it all because you don't.

Understand that for all the amazing liquids within whisky, it is a business. Discover how it works.
Don't think big is bad or that blends are inferior.
Treat every glass as the first time you have ever encountered that dram - because it is.

Be confident, but don't be driven by ego - you are there to pass information along and there will always be people there (the folk who make it) who know more than you. Keep things simple, accurate, entertaining.

Thank you to Dave Broom for graciously taking time out of his busy schedule to grant me this interview.

The writers I have met so far see themselves as mere mortals so humble and quiet in their greatness yet thousands of us flock to the whisky shows, buy their books and follow them on social media because we see them as our history keepers, our experts, our muses.  I'm 100% positive that my "mousai" are not even aware of how they profoundly impacted my whisky journey. Simply put, I wouldn't be here without them.

May you find a whisky muse in your future but until then don't stop questioning, learning reading or listening.  It is an ever expanding subject..

Posted by Whisky Lassie at 3:51 PM