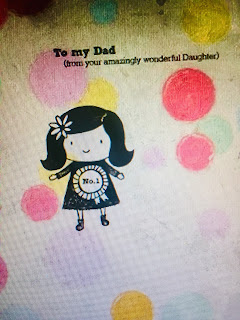 At the end of May 2016, my father and I celebrated our individual milestones:  He turned 80 and I was soon turning 50. I wrote a blog and the last thing I mentioned was: "May you live another great 20 years as well as dance with me when I turn 70". Less than three months later, dad was in an assisted living home, on my 52 birthday he didn't know who I was anymore and on January 3 2019, he passed away peacefully in his sleep. Fuuuuck….

As mentioned before, this past year rocked me to the core of who I thought I was and "what" life was supposed to be. I felt vulnerable, scared, angry but most of all I felt robbed. During the shit storm I forced myself to find the positives: Moving into my own place, learning to cope with things I can't control or change and connecting with some positive and very strong women (AMEN MY GINJA SISTERS)! And of course Miss Maci Michelle Romaniuk. My goodness if ever you need to move out of a hellish depressive state, hang out with little people!

So back to January 3rd 2019. Calling my brother to tell him dad had passed away - hardest thing I've ever had to do (tears in my eyes just writing that...). Everything that comes after death, albeit a mind numbing exercise, moves you forward: Dad's last wishes, what funeral home to call, cremation, calling his brother and sisters, my mom, my kids, what to do with his things, donations, obituary, etc... Two days later, everything was in place, decisions made, and that... was that... I retreated (as I always do) in the solitude of my own pain. I didn't want anyone telling me how sorry they were, I didn't want hugs or any kind of human connection. Then came writing the eulogy. My father was not an easy man to be around. My parents separated when I was 9. He was an alcoholic who floated into and out of my life for many years. How do you write those things in a eulogy!? I write, it's what I can do really well (I think anyway...) so I did, and did it truthfully. 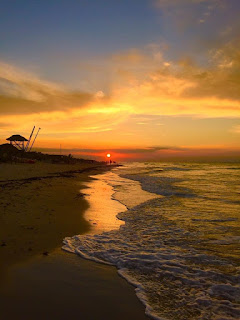 January 10th 2019 - the boy took me to Varadero, Cuba. Smartest thing he could have done. Within a few hours I had shed my winter garbs and I was in shorts/flip flops. We lazed, sat by the pool, danced, ate and toured but most of all I woke up early every morning and watched the sunrise on the beach alone. It gave me that complete solitude I desperately needed. At first it was simply some self reflection. The ability to look back at the year and say: WHAT THE FLIPPING FREAKING FLYING #@*&! But as the week moved on, my mornings were more like: Breathe, wow, I'm good, blessed... "we" got this.

Now, I recall telling the boy about a week before we were leaving for Cuba that I wasn't much of a rum drinker nor was I a cocktail/drink all day next to the pool kind of person. Varadero and our resort was amazing. The day trip to Havana - stunning! My highlight; however, was visiting a sugar cane plantation and tasting local rums. I'm not talking bar rail. Small batch (Not 10,000 bottle releases), Cuban "Ron". The country has about a dozen rum distilleries, The better known would be Havana Club, Perla del Norte, Santero and Santiago de Cuba just to name a few. 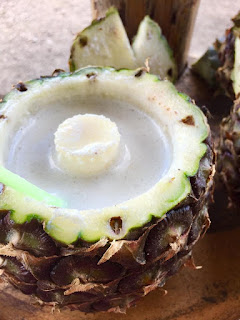 My first rum was enjoyed in a coconut milk, nutmeg pineapple something something (Literally drank that at a small little shop on the side of the road), then after that I went all IN, trying every single different rum I could find at the resort and anywhere we went. We stopped at "La Casa del Ron" where the majority of the rum was Havana Club, which of course employees were giving out free samples of. I turned that down politely and started asking questions about the other rums they had up and behind the counter. They literally let me try about 7-8 of the different rums and retrieved their "top rum" guy. He and I chatted and sipped beautiful Cuban rums for the next 45 minutes. I was in RUM heaven. So of course what does a whiskylassie do when she's found another delicious spirit to enjoy: She buys 5 bottles!!! 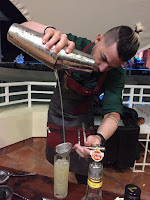 Rum cocktails became a "poolside" delight back at the resort: Cubata, Rum punch, Mojito, Canchanchara, Daiquiri, Pina colada and my favourite in the evenings - just served on ice to sip at. I think I only had one scotch the entire trip and don't ask me what it was as I have not a clue. RUM was queen on the island and I was more than willing to learn, relax and enjoy her companionship and beauty.

I have bought many other rums since that glorious holiday in January 2019, my whisky room is a little more diverse now. I've also acquired a few rum books, highly recommend Dave Broom's: Rum, the Manual and have learned to master several fabulous cocktails. It's an interesting journey that I find myself on. I highly doubt that I would have ever really even liked rum like I do now had it not been for the boy's desire to get me out of dodge for a week. I've learned that everything does really happen as it's suppose to and that like every other great spirit I've discovered over the last few years, rum was meant to be part of my "repertoire" and to my wallet's dismay yet another rabbit hole I was meant to fall gracefully down! 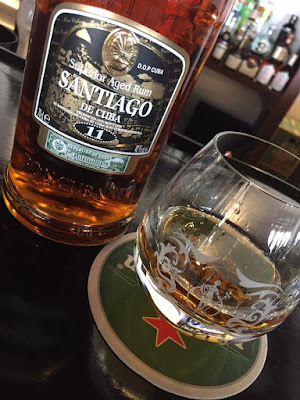 My rum discovery pick for 2019 is Ron Santiago Anejo Superior 11 year old. It is a molasses based rum and even though it's colored I find it quite tasty in a rocks glass on ice. After a discussion with a barman at a local hotspot in Varadero, I saw this bottle up on the shelf and asked him if he had ever tried it. I was advised that although many of the locals would recommend it, it was far too expensive to buy a full bottle on their salaries. So, I bought he and myself a dram. His shift was ending soon, so he thanked me profusely and I watched a little later how he simply sat with it at the end of the bar, savoring every sip. I do love to share even if not through #whiskyfabric...

Finish: Warming, silky and a touch of peppery.

Only bad thing: Not available in Canada (the 12 is in Quebec) but can be found on a few UK web sites.


I really do enjoy Cuban rum. It's a staple in my collection and I love introducing it to people. As of late I would also like to thank Dan Vienneau at Hopscotch Whisky Bar in Saint John New Brunswick. For the first time in my life I tried a rum soaked (errr I mean spiced) eggnog and it was fabulous! One of my latest favourite rum recipes that will certainly be enjoyed over the Christmas holidays. Cheers Dan!
Here's to January 2019, to my dad (wherever you are dear sir) and to the white sands of Varadero. The biggest thank you goes to the boy (Chris), for taking me away and starting the new year with much needed rest, reset and memories that will last us a lifetime.

Lassie
Posted by Whisky Lassie at 10:45 AM